A vital task for the welfare of our business is to choose the right framework for a new javaScript system, application or website. As in modern technology, quantity of JavaScript tools is steadily on increase, this increment in the number of tools is turning out to be a huge challenge as far as the selection of best framework is concerned. For the same, we have two entities in the world of technology, termed as Angular and react.

Let’s compare both the frameworks based on different aspects:

Talking about the popularity of both the frameworks, both are highly-performing, advanced and widely used frameworks with extensive qualities and the specific features. Based on recent js framework comparison, React is regularly used by 53% of the people while 32% are planning to grab it soon. On the other hand, Angular is already applied by 30% and 10% are going to give it a try. The latest update, Angular 2, is already grabbed by 13% and approx 43% are seeking to become familiar with it. Among all such Hot Frameworks ranking names Angular JS the second most popular framework across the globe taking a backseat to that of ASP.NET.

Both the frameworks stand almost at a same level of popularity but with the rising of ReactJS and its ease of adoption, there is a significant hike in the adoption of React JS above to that of its opponent Angular JS. But with today’s technology ecosystem that is fueling with Mobile Apps and Web Apps, Angular JS continues to be the best one of all other JavaScript Framework while on the other hand, ReactJS is yet to prove itself in an aspect of time by handling the websites of medium to high complexity. Involvement of prompt rendering and presence of JSX is what that turns React JS in a highly impactful JavaScript framework. The resultant workflow of the stack is totally different from Angular which shows that the comparison of both the rivals is moot.

Talking about dependency injection, which is a main factor of contention because of contrary to the prevalent react paradigm of functional programming and immutability. But a bit sort of dependency injection is almost unavoidable in the data-binding environment because it leads to having decoupling where there is no separate data layer architecture involved. On comparing, we found Angular a step ahead to that of React as it supports DI and another great plus point is the ability to have different life cycles for different stores.

Performance of Angular is sensitive as far as the scope is concerned because of a copy-n-compare factor as it does not allow the use of large models. Hence, this includes both pros and cons based on the particular scenario. Coming to the pros, it makes the code simpler and more testable but referring to that of cons, one needs to break down the stuff and have to rebuild it again. React however delivers the power of choice without performance penalty. However, the outcome really depends on whether you are a good coder or the bad one.

React and Angular both the technologies offer completely diverse approaches to web apps development for small, mid-market business or for the startup. Both the rivals are powerful, flexible, while none of them is worse or better than the other one. Depending upon custom app goals developers can switch from ng2 to React, and back. Selecting the Angular, it leads the creation of core skeleton for the front end application, while React.JS can be used to improve its specific parts, and it can also be integrated with other existing frameworks such as backbone or even the known Angular. 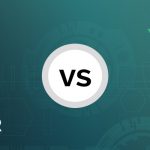